Tears welled up in Ranbir Singh’s eyes when he saw Govinda, ‘My God has come’. 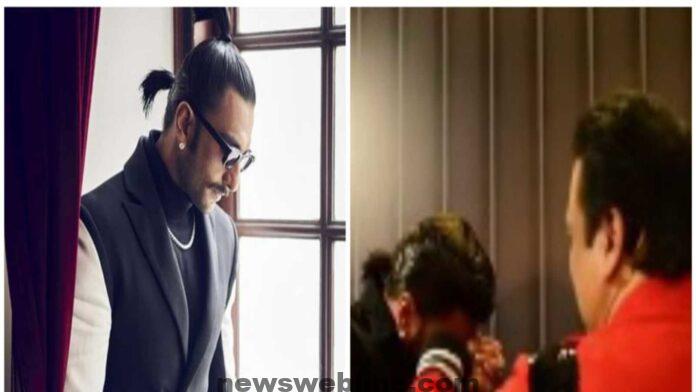 Ranbir Singh is currently entertaining the viewers with his TV show ‘The Big Picture’. Ordinary people as well as celebrities also took part in this show. In this episode, on the occasion of New Year, Bollywood hero no. One means Govinda, be a part of this show. The audience was thrilled to see him on stage. But Ranbir Singh himself is the most exuberant. Couldn’t contain his feelings after seeing his favorite actor (Ranbir Singh Get Emotional). During the show, Ranbir described Govinda as his deity.

Tears in Ranbir Singh’s eyes
Colors TV (The Big Picture Promo Video) shared a promo video of this special episode on its official Instagram account. This video shows Ranbir getting emotional while welcoming his favorite hero. As soon as he comes in front of Govind, Ranbir Singh, who is always smiling, gets tears in his eyes (Ranbir Singh breaks down). Seeing them crying, Govinda also became emotional. He silenced Ranbir. He wiped the tears from Ranbir’s eyes with his hand, then the two actors hugged each other. Now this video is going terribly viral on social media.

Govinda is the god of Ranbir
Welcoming Govinda on the show, Ranbir Singh called him his God. Ranbir said, ‘Today, on the special occasion of New Year, my God Himself is coming to meet us. The only and only hero number one Govinda. As soon as Govinda came on the stage, he fell on Ranbir’s feet. Then Govinda picked him up and hugged him.


Ranbir-Govinda on stage
The two stars had a lot of fun during the show. Ranbir also danced to Govinda’s super hit song. Ranbir-Govinda captivated the audience with their dance moves in songs like ‘Ishq Hai Suhana’ and ‘UP Wala Thumka’. Govinda’s wife Sunita, daughter Tina and son Yashvardhan Ahuja also joined the show through video call.

Film ,Heart killing, We worked together
Ranbir Singh has said in many of his interviews that Govinda is his favorite actor. When Ranbir got a chance to work with his favorite star in the 2014 film ‘Kill Dil’, he was overjoyed. Ranbir said in one of his interviews, ‘Govinda ji is a legend and he himself is a school of acting. I’m a big fan of her. I saw his movie. I have seen some movies more than 50 times. I don’t just like his pictures, I love him a lot.