KBC 1 :: Amitabh Bachchan asked Sehwag – How did it feel to defeat Pakistan? ‘Dialog’ recited in reply 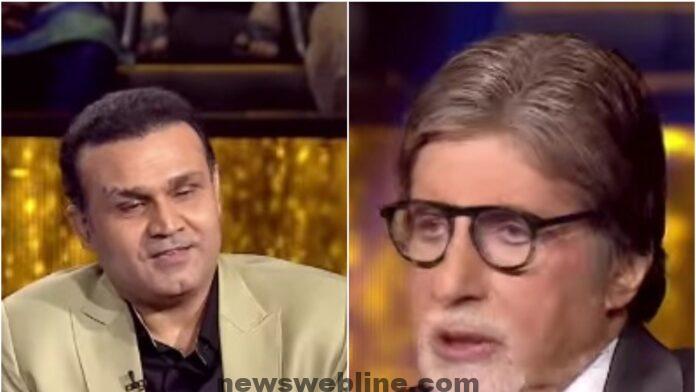 New Delhi. Amitabh Bachchan has once again come to the audience with the show Kaun Banega Crorepati (KBC 13). Himani Bundela is the first millionaire this season. Former Team India captain and current BCCI president Sourav Ganguly will be a celebrity guest on the show this week. Virender Sehwag will also be with him.

A promotion of this event is in the headlines nowadays. In this, Sehwag is seen answering many questions of KBC host Amitabh in a very interesting way. Even Ganguly can’t stop laughing when he hears his answer.

At the beginning of the promo, Amitabh Bachchan told Sehwag that we heard you sing a lot while playing. After that, Sehwag started humming Kishore Kumar’s song ‘Chala Jata Hoon Kisi Ki Dhun’. Big then asks him what would happen if he fielded and missed the catch. In response, Sehwag pointed to former captain Ganguly and said, “If you are coach Greg Chappell, there is a song, ‘You’re going to be cut in Jaise Taise, Ali will tell you what’s going on’.” Ganguly burst out laughing when he heard her answer.

After that, KBC host Amitabh can be seen asking Sehwag what he thinks if the Indian team beats Pakistan and Australia. Sehwag gave a very interesting answer. He said Shahenshah is a famous dialogue in the film. As soon as he said so much, Big B said that dialogue from the other side that ‘Rishte me to tomak baap lagte hai’.

After all, Sehwag does not hesitate to say that we are his father. In fact, this dialogue is from Amitabh Bachchan’s film Shahenshah. This celebrity special show from KBC will air this week on Sony TV at Friday night at.