Corona in India: 47,092 new cases in the country, 509 killed in Kerala’s deteriorating situation 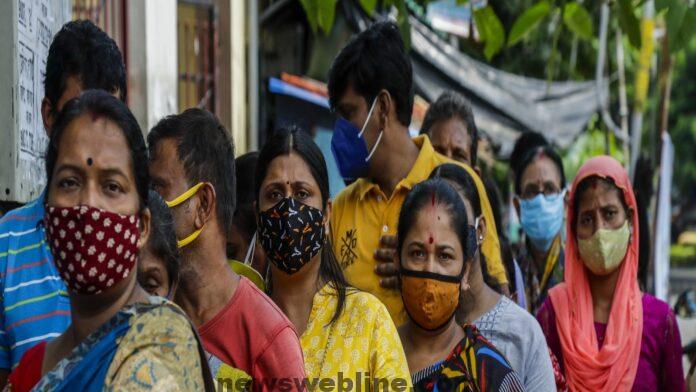 New Delhi. New cases are on the rise in the country amid fears of a third wave of corona virus infections. According to the Union Ministry of Health and Family Welfare (MoHFW), in the last two hours, 092 new cases were reported in the country, while 509 Is dead. At the same time, 35,181 people have been exempted. According to the ministry, there are currently 3,89,583 active cases in the country, 3,20,28,825. People have been released and 4,39,529 have died. The ministry said there are currently 3,28,57,937 confirmed cases of corona in the country. Of these, 1.15% were active, 97.51% were discharged and 1.34% died. On the vaccination front, the ministry said on Wednesday that more than 660 million doses of the Covid-1 anti-vaccine had been given in the country so far.

Mandabia reviews Karnataka, Tamil Nadu amid rising cases in Kerala
Amid a growing case of Kovid-1 of in Kerala, Union Health Minister Mansukh Mandabia on Wednesday said adequate measures should be taken to curb the spread of the interstate state of the infection. He called on Karnataka and Tamil Nadu to speed up vaccination in border districts. In a telephone conversation with the health ministers of Karnataka and Tamil Nadu on Wednesday, Mandabia reviewed the Kovid-1 situation in the state, the health ministry said in a statement.

Due to the growing number of cases in Kerala, the Union Health Minister has discussed issues related to Covid-1 management in the bordering Karnataka and Tamil Nadu regions. Highlighting the need for adequate measures to curb the inter-state spread of Kovid-1 infection, Mandabia called on the concerned health ministers of Karnataka and Tamil Nadu to expedite vaccination in the border districts of Kerala.

It said the Indian government was at the forefront of tackling the coronavirus epidemic. The five-point vaccine (including identification, detection, treatment and covid appropriate behavior) is an important component in combating the epidemic, the statement said. Meanwhile, Mandavia has reviewed the supply and availability of essential medicines related to Kovid-1 to the country.

A statement from the Ministry of Health said that during the review period it was found that adequate stocks of all the required medicines were available. The raw materials of these medicines are also available in sufficient quantity. Strategic buffer stocks have been created for eight drugs and they are all available in the country, the statement said. These drugs are tocilizumab, methyl prednisolone, anoxopyrene, dexamethasone, remdesivir, amphotericin B dexicolate, posaconazole, and intravenous immunoglobulin (IVIG).

The new cases include 108 health workers, 154 patients from outside the state and 1,380 who came in contact with the infected, the release said. At the same time, in 1,161 cases there was no clear cause. Currently 5,57,085 people are under observation in different districts. Of these, 5,24,380 were at home or in institutional isolation and 32,705 in hospitals.

In Maharashtra, 545 new cases of Covid-1 of, 13 patients have died
With the arrival of 455 new cases of Kovid-1 in Maharashtra on Wednesday, the total number of cases of corona virus in the state has risen to 6, 322, and the death toll has risen to 1,37,496 after the death of 13 more patients. An official of the state health department said this information. In the last 2 hours in Maharashtra, 40 patients of Kovid-1 of were also infected, which has led to an increase in the number of people in the state who have succumbed to the deadly virus to 2,7,300. The number of patients undergoing Covid-1 for treatment in the state has increased to 51,078.

In Maharashtra, the recovery rate from infection has risen to 97.03 per cent and the death rate to 2.12 per cent, according to a health department official. Apart from the rural areas of Dhula, Jalna, Hingoli and Washim districts, no new cases of corona virus infection have been reported in Malegaon, Dhule and Nanded municipal areas in the last two hours.

On Wednesday, 353 new cases were identified in Ahmednagar district of the state, followed by 808 new cases of corona virus infection in Pune. In the last 2 hours, the highest number of Kovid-1 patients died in Pune city. In the capital Mumbai, 415 new cases of corona virus infection have occurred and four patients have died. In Maharashtra, 1,78,004 samples were tested for Covid-1 for the last 2 hours. So far 5,41,54,890 samples have been tested for Covid-1 for in the state.

On Wednesday, 24 people were discharged from the state hospital after recovering from the infection, while 28 people finished their home detachment time. No coronavirus patients died in the state on Wednesday.

State Health Department officials said Wednesday that there have been 311 new cases of the infection. These include two from Raipur district, one from Durg, one from Rajnandgaon, one from Goriaband, five from Bilaspur, three from Korba, one from Gaurela-Pendra-Marwahi, one from Korea, one from Yashpur, two from Bastar, two from Kondagaon. One, two from Dantewada, eight from Sukma, one from Bijapur and one from another state have been included.

He said that so far 10,04,482 people have been infected in Chhattisgarh, out of which 9,90,536 patients have been discharged after treatment. 391 patients are undergoing treatment in the state. The virus has killed 13,555 people in the state.

According to the bulletin, 1,71 patients of Kovid-1 of Tamil Nadu were also infected in the last two hours, bringing the number of people in the state who have succumbed to the deadly virus to 25,64,20. In Tamil Nadu, the number of patients undergoing Covid-1 for treatment has come down to 1,620. Among the new cases of infection, 186 new cases of corona virus infection were detected in Coimbatore, 177 in Chennai and 137 in Erode district.

There were no deaths due to Kovid-1 to in Delhi, 36 new cases have been reported
There were no deaths from Covid-1 in Delhi on Wednesday, while 36 new cases were reported with a 36. new infection rate. According to information shared by the Department of Health, this information has been found. This is the 20th time since the second wave of the Kovid-1 epidemic epidemic in the national capital that no deaths have been reported in a single day.

According to official figures, the number of daily cases dropped to 20 on August 30, when one death was recorded. On Tuesday, there were 28 cases with an infection rate of 0.05 percent and one patient died.

The state health department said in a bulletin on Wednesday that 1,39 Kovid-1 patients had been infected in the last two hours, bringing the number of people in the state to 1,1,8,22 and the number of patients undergoing treatment had risen to 14,473.

Four patients of Kovid-1 of died in Krishna district. Later, two died at SPS Nellore, one each at Chittur, East Godavari, Prakasham and Visakhapatnam.

Officials said that as per the order of the school education department, offline classes of VI, VII, IX and 11 classes have been allowed to start in all private and government schools under the department from September 2.