BAN vs NZ: Bangladeshi players celebrate victory in this way, the video will win hearts 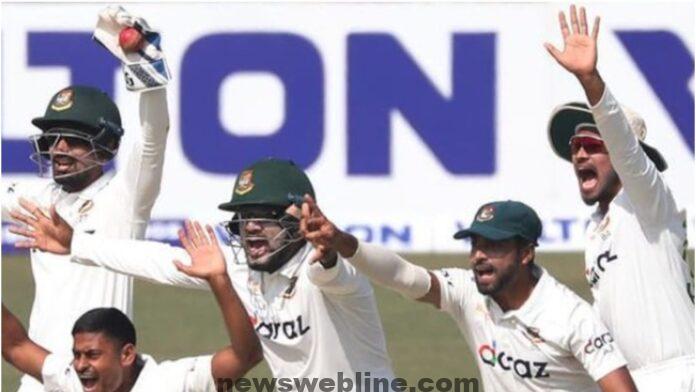 New Delhi. Bangladesh has done what many parties have not been able to do in recent times. He lost to New Zealand in a Test at home. Also in the absence of his star all-rounder Shakib Al Hasan. Bangladesh defeated defending world champions New Zealand by 8 wickets at Mount Maunganui to win for the first time in any format (Test, ODI and T20). Now that the victory is historic, its celebration will be equally big. Bangladesh team defeated New Zealand in the first Test and celebrated in the dressing room. Bangladesh Cricket Board has shared a video of it.

In this video, all the players and coaching staff are seen standing with their hands on each other’s shoulders. This time, all the players were seen bouncing together after addressing Mushfiqur Rahim, a 34-year-old veteran of the team. In the video, Rahim is heard saying that if we record a historic victory, it should be fully enjoyed. After that all the players started jumping for joy.

Bangladesh lost the target by 2 wickets
Bangladesh cricket team Ibadat Hossain is the hero of this biggest victory in the key test. On the fourth day, he brought Bangladesh close to a historic victory. Ibadat also took New Zealand’s last two wickets on the fifth and final day on Wednesday. The hosts were all out for 169 in the second innings, their lowest score against Bangladesh. New Zealand trailed by 130 runs in the first innings, leaving Bangladesh with just 40 runs to win, which Bangladesh lost by two wickets.

Kohli-Pujara-Rahane have not won a single match as India has been waiting for victory like Bangladesh for many years.

BAN vs NZ: Going to play volleyball for the Air Force and becoming a cricketer, this time Bangladesh got the biggest win